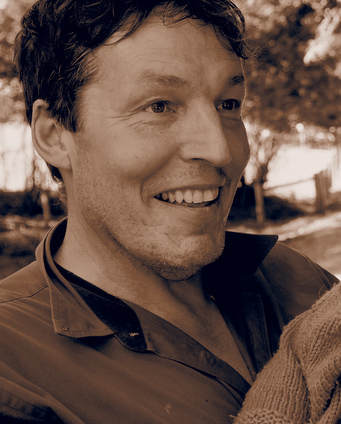 ​My wise grandad and my history-loving uncle
My grandparents on both sides of the family were  farmers, so I think being on the land is in my bones.  My father was a foundry worker who died when I was five.  The expenses left my family destitute, so we moved to be close to grandparents.

Granddad was a very wise old man born in the 1880s (before the car, electricity, common telephones, planes and so on) and my Uncle lived in his history books and would often speak of castles, battles, honour and adventures.

Both men had an influence on me that you see reflected in the landscaping, furniture and architecture of the property.

Sacred sites when I was young
Mum dropped my brother and I into Sunday school and occasionally we would go on a Sunday-school picnic to the Bunya Mountains (a sacred indigenous meeting place).

My six-year old decision – a magical, rainforest place
My young mind found peace in trying to reconcile my father’s death under the ancient trees and by the streams in the Bunya Mountains and it was then at age 6, I decided one day I would live in a magical healing place in a rainforest by a stream and build a sanctuary that would last for generations for people to meet and for my children and grandchildren to find peace.

Hard work and perseverance
Many people laughed at the idea and questioned how I planned to afford such a life.

I had no idea how, but I held the belief I would…one day.   So I put myself through university working a few jobs to complete an engineering degree.  I identified niche areas, taught myself all I could in those areas to specialise, and started earning a decent wage.

An engineer with a global business
Before long I owned and was running a technology consulting business, with offices in all continents and head office in Las Vegas.  I could have stopped and found my paradise, but I was so far removed from nature, my childhood dream was but a distant image.

My 2 yo daughter’s flower provided perspective
Then, one day I was holding my 2 year old daughter by the hand and hurrying her along a path to the car so I could drop her to day-care and be on time for a meeting.

Suddenly, I felt a little hand tug on my hand and I stopped.

She started leaning toward a garden bed, and then she bent down to smell a flower: Extremely present, completely oblivious to time and any meetings that needed to be attended.

At that moment, I dropped my brief-case, bent down to smell the flower with her, and the dream of the little boy once more became strong.

My quest
I missed my meeting, decided to sell my business, abandon the conditioning of society, and honour my dream. So my quest began and I found Huonbrook:

Challenging times…press on
The house and out-buildings were neglected, covered in weeds up to the door, green with mould inside and with kitchens and bathrooms falling apart, it was certainly a challenge, but there was something special about the location and I was no stranger to hard work, so I purchased Huonbrook in 2005.

By mid-2007 I had a buyer for my consulting business.  By 2008 I had effectively handed over the operation of the business to the purchasers, but the global financial crisis had resulted in the collapse of the sale.

Then there was a divorce and property settlement and the dream was rapidly vanishing.

Instead of jumping back into the business and my old life to rebuild financially,  I chose to be present for my daughter and stay true to my childhood dream, so I wound the companies up, shelved the intellectual property, and took a leap of faith that if I persevered, things would work out.

Easier to walk, but I stayed... later.. Love found me
The easy choice was to walk away, but we must not let go of our dreams, for dreams provide hope, realised through faith, supported by love.

Love, the final missing ingredient…eventually came into my life in the form of Lani.
Read lani's story